Class size on the rise in Salem-Keizer schools 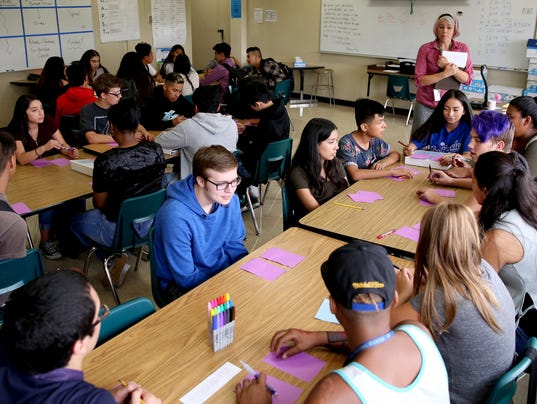 Class sizes in Salem-Keizer schools are on the rise again.

This year, middle schools will see the largest increase, adding about one student per class for an average of 32 students.

Elementary and high school classrooms will increase by less than one student per class. The average class at elementary schools will range from 23 to 30 students. About 40 percent of high school classes have 35 students or more enrolled. These classes compare to the statewide average of 25 students per class.

District officials said this is the first year in nearly a decade the district hasn’t been able to hire teachers to maintain class size. Salem-Keizer is the second largest district in the state with nearly 42,000 students in 65 schools.

While Salem-Keizer approved a $10.5 million supplemental budget on Sept. 12, that won’t directly impact class size this year, said Lillian Govus, a spokeswoman for the district. The supplemental budget will add 25 full-time equivalent positions across the district, eight of which are specifically meant to reduce overload in situations where schools are already overcrowded, she said.

Large class sizes are particularly damaging in lower grades, where teachers are building students’ understanding of core subjects, such as reading, writing and math. This is in addition to developing social and emotional skills, including how to follow instructions, how to share and how to sit still.

Asking a lot of teachers

When Kirsten Manning started teaching in 2000, she said, Oregon was considered one of the best states for quality education.

Now, under certain indicators, Oregon falls to the bottom.

Manning teaches reading intervention at Hoover Elementary School in Salem, but in her last class as a third-grade teacher, she had 33 students.

Oregon has one of the highest teacher-to-student ratios, is in the bottom three states for graduation rates and is ranked 35th in the nation for school funding.

Issues with large classes create a difficult work environment for teachers, Manning said. “Nobody wins in that situation.”

When a new student is added to her class, Manning said, she wishes the school would also bring a new desk, but there aren’t enough resources available. When it comes to giving individualized attention to students with disabilities, or students deemed gifted and talented, she said, “someone’s needs aren’t being met.”

Some argue class size isn’t the issue — it’s the quality of teachers.

But in 2015, Salem-Keizer reported 99.8 percent of its teachers were “highly qualified,” as defined by the federal government. On average, the district’s teachers had 10.5 years of teaching experience.

And proposed legislation that would have allowed class sizes to be used in collective bargaining failed during the recent Oregon legislative session.

“It’s unfair to ask (this) of children and the teacher,” Manning said. “As teachers, we know day-to-day what we signed up for, but can we ask them to do that long-term?”

A struggle to learn

Manning’s son was diagnosed at the age of 2 with a sensory-processing disorder.

He is extremely sensitive to noise, sound, and light. “Because of this, his early years were overwhelming,” Manning said when giving testimony to Oregon’s Class Size Task Force.

She asked lawmakers to imagine her son was their child. “Imagine you take him to his first day of first grade and there are 30 children in the classroom,” she said. “Imagine 30 6-year-olds in one room all day long.

“Now imagine that by the end of the week, that classroom enrollment had grown to 34 children,” she said. “It stayed that way all year.”

Even with a patient and kind teacher who sent her progress reports when her son had a particularly good or bad day, Manning said the large class size was still a struggle for her son.

“(His teacher) was admirable under pressure and her students got her best every day,” Manning said. “However, if she continues to have those kinds of numbers year-on-year, how much longer before she burns out?

“Also, how much better would the year have been for all of those children, and particularly those most vulnerable in our system, if she had had (fewer) children in her care?” she asked. “We can do better.”

The effect was twice as large for students of color and those living in poverty, which helped narrow the achievement gap.

Experts say there is no one “magic number” to aim for with class size. Depending on the district, school and course, numbers should and will vary.

Manning has read research that mandates 20 students or fewer per class. But she said she has never taught fewer than 25 students. In most studies, a class of 22-26 students is considered a large classroom and less than ideal, she said.

“That ‘magic number’ is when instruction and learning outcomes for children are maximized,” Manning said. “Research tells us that the ideal number of children in a classroom for grades K-3 is 18.”

For elementary students, especially kindergartners and first-graders, there are a number of skills they have to develop, like how to sit on the floor, how to line up, how to do what people tell you rather than what you want, how to share and how to use a pencil.

Manning said it’s important students learn these skills on time so they don’t have to keep relearning. Otherwise, there is an impact on students’ abilities to read, write, interact socially and more.

“That’s a lot of makeup work,” Manning said. And if they don’t learn on time, she said they will be “behind for good.”

John Larson, the newly elected president of the Oregon Education Association, has worked for years as a high school English teacher in the Hermiston School District

When teaching advanced placement language and composition, a class of 22-23 students would have been appropriate, he said. But there were often 38-40 students in his class.

Larson said each student essay takes about 15 minutes to read and provide feedback. Students write about 10 per semester.

With 40 students, that would be about 100 hours a semester spent on grading essays alone. The more students he has, and subsequent essays he has to read, the less attention he can give each one.

“I think we all agree the more individual care, the better,” Larson said.

With large classes, he said, some teachers are only able to give about 30 seconds per student per class of individualized attention. Larson said that isn’t nearly enough time to identify areas they are struggling and offer guidance.

When he taught a remedial reading course, Larson had 27-28 seniors who needed him to diagnose why they weren’t reading well and provide lesson plans for each of them.

In this case, Larson said, 12-13 students would have been appropriate.

Larson said he doesn’t believe anyone thinks these large classes are a good idea. “It’s a resource issue,” he said. “Every teacher I know does everything they can … but eventually, it becomes crowd control.”

In the 2014-15 budget, Salem-Keizer schools allocated $2.66 million toward reducing K-3 average class sizes by two students. This money was to be used to hire more teachers and supply these teachers with needed space and materials.

The district added more than 170 licensed classroom teachers over the past three years, according to the 2017-18 budget. More than half of the teachers were hired at the elementary school level.

This year, however, most districts in the state, including Salem-Keizer, had to make reductions instead.

Educators like Larson and Manning agree change will most likely come down to funding. One solution is hiring more teachers, but that costs money districts don’t have.

Some education advocates pushed for a new tax that would bring in more money for public schools and other government services, but it didn’t pass.

Manning said Oregon needs to come up with a funding model that completely funds education and is not dependent on the rise and fall of the economy.

Larson said schools need to develop individual plans. For a small, rural school with only 68 high schoolers, for example, large class sizes may not be an issue. Those schools may need funding for other issues, like increasing course options.

Larson said it will be important to keep an eye out for school districts’ plans on how to implement the Every Student Succeeds Act.

Since the act allows states and districts to craft plans to their specific needs, individual districts may have the ability to address class size.