Hundreds of professional and top amateur scientists will crowd Willamette University to view and study the solar eclipse Aug. 21.

The Salem university is estimating one of the world’s largest gatherings of solar scientists on campus that day, with researchers coming from as far as Ireland and Japan.

The result could make history. For centuries, scientists have used solar eclipses for research, aiding the discovery of helium in 1868 and proving Einstein’s theory of general relativity in 1919, among others.

Scientists coming to Willamette, including more than a hundred from the American Astronomical Society’s Solar Physics Division, will be looking to answer some of today’s most pressing celestial questions.

But why Willamette? The private liberal arts university — home to about 3,000 undergraduate students — isn’t a large, research college, nor does it have a space observatory.

Adam Torgerson, a university spokesman, said it likely comes down to Willamette being in the right place at the right time. The campus is located in the center of Salem, the largest city in Oregon within the path of totality.

The school also comes with science community clout because its president, Stephen Thorsett, is an internationally recognized astrophysicist. 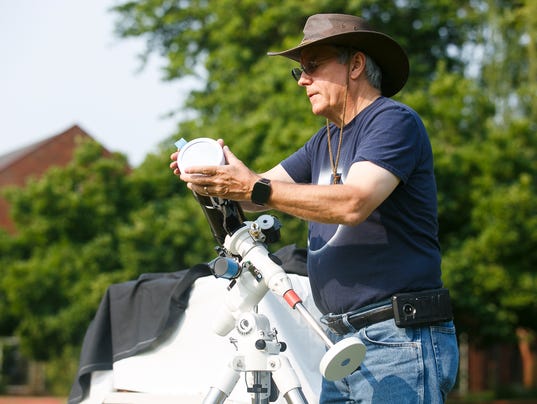 Scientists attending will represent NASA, PBS Nova and other acclaimed groups, but some are simply passionate individuals, or “citizen scientists.”

Among them will be amateur scientist Mike Conley.

Conley is the Oregon statewide coordinator for the Continental-America Telescopic Eclipse Experiment. He is taking part in the national research project after years of capturing images of astronomical events as a hobby.

Team members like Conley will attempt to capture the solar eclipse from nearly 60 different locations in the path of totality, spanning 3,000 miles from Oregon to South Carolina. The images will be compiled into an estimated 90-minute video, showing the entirety of the historic eclipse.

The experiment will aid project leader Matt Penn study the inner corona of the sun, which is only visible during a solar eclipse.

The two have practiced each meticulous step in the process — from setting up the tripod and attaching the telescope to taping the filter and preparing the software, making sure everything is in place for the big day.

Conley has worked with other citizen scientists across the state and trained them on how to use and test the equipment so they “could do it in their sleep.”

Come fog or bad weather, he said they are ready to take on the eclipse and be part of a once-in-a-lifetime scientific adventure.

Professional scientist or not, everyone is welcome at Willamette for a free viewing beginning at 8 a.m. on the university’s north lawn, across State Street from the Oregon State Capitol.

Here are two other events leading up to the eclipse:

Campus events kick off in Roger’s Music Center on Friday, Aug. 18, at 7 p.m. with a lecture by astronomer and author Ray Jayawardhana, who will present “A Spectacle Like No Other: The Science and Adventure of Chasing Solar Eclipses.”

Tickets are $5 and may be purchased at willamette.edu/go/eclipse.

On Aug. 19 at 7:30 p.m., Willamette professor and cosmologist Rick Watkins will give a free pub talk entitled, “”Distilled: from the Eclipse to the Big Bang.”

The pub talk is geared for the public and no ticket is needed. A Q&A session will follow the presentation at Shotski’s Woodfired Pizza, just east of campus at 1230 State Street.

For more information on either event, or to purchase tickets for Friday’s talk, visit willamette.edu/go/eclipse.