Cynthia Richardson, the principal at North Salem High School, is taking on a new position created by the Salem-Keizer School District.

Come July 1, Richardson will be the district’s first Director of Student Equity, Access, and Advancement.

“This work is very close to my heart and my passion for helping young people attain their goals and dreams,” she said.

In her new position, Richardson said, she will be organizing and leading the district effort “to provide better access to education for our students of color, students of poverty and English language learners.”

Starting at the district

Richardson said for many years, there has been a gap between the student achievement levels of our minority and non-minority students.

“The district has made many efforts to reduce that gap and provide more supports for our minority students and ELL students,” she said. “In my new job, I will help bring all of those efforts together in a more consistent framework and implement strategies to take us to the next level.”

Additionally, economically disadvantaged students graduate in the district at a rate of 64 percent and English Language Learners graduate at 60.9 percent, compared to the district average of 71.7 percent.

Richardson said in her new position she plans to leverage her relationships with community organizations like the NAACP, Oregon Black Pioneers, Coalition for Equality, Mano a Mano and RJOC to “build partnerships and open lines of communication to provide a voice for our communities of color.”

“For me, the next level means all of our students — minority and non-minority — truly having the same opportunities for success,” she said. “This work is consistent with the district vision that says: All students graduate, prepared for a successful life.

“It is also consistent with my lifelong passion for seeing students succeed regardless of their background or their life circumstances.”

Linda Myers, who will oversee Richardson’s new position and department, said the position is responsible for introducing the concept of equity across all aspects of the district, including the continued implementation of the newly adopted equity lens with the school board, professional development for staff on culturally responsive practices with students, and establishing partnerships with local agencies supporting the needs of our diverse students and their families. 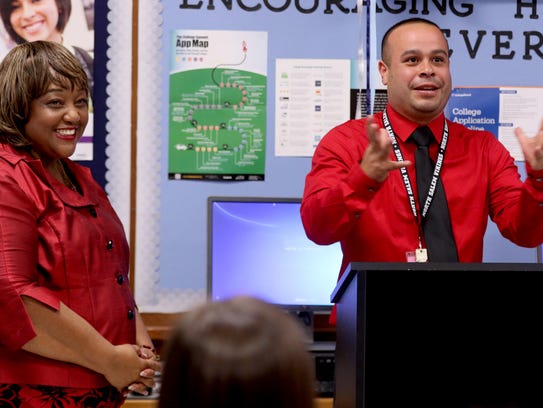 Adrian Rodriguez, the ASPIRE Coordinator, and North Salem High School Principal Cynthia Richardson speak during the dedication ceremony for an ASPIRE Center at North Salem High School in Salem on Thursday, Oct. 1, 2015. The Salem-Keizer School District is now the first district in Oregon to have the college and career mentoring program in all middle and high schools. (Photo: ANNA REED / Statesman Journal)

To measure Richardson’s success, equity work will be woven into the 2017-18 Strategic Plan and the district will regularly monitor data and feedback from staff and students.

The Office of Student Equity, Access and Advancement was formed in the fall of 2016, Myers said. The office reviews current policies and procedures to ensure that the opportunity gap for different groups of students is eliminated.

“Cynthia brings a wealth of experience and passion to the work of eliminating barriers for students and staff,” she said. “She has championed this work during her tenure as building principal at North Salem High School as well as previously at McKay High School and Adam Stephens Middle School.

“When it was time to seek someone to continue leading the work for our most at-risk populations, Cynthia was a natural choice.”

Sara LeRoy has been principal at McKay High School in Salem for four years. As Richardson accepts the new position, LeRoy will fill her shoes.

“I really love McKay and I have invested a lot (into) the community, but there are a lot of reasons to transfer,” she said, explaining how she can apply her experience at McKay to further North’s accomplishments.

LeRoy worked at North for seven years before she became McKay’s assistant principal in 2010. After three years, she became the school’s principal and has served four years since.

“I will always have McKay in my heart,” she said, “and McKay will continue to thrive.”

Students at McKay have expressed their frustrations with the change, beginning a social media campaign with the hashtag #keepLeRoy. 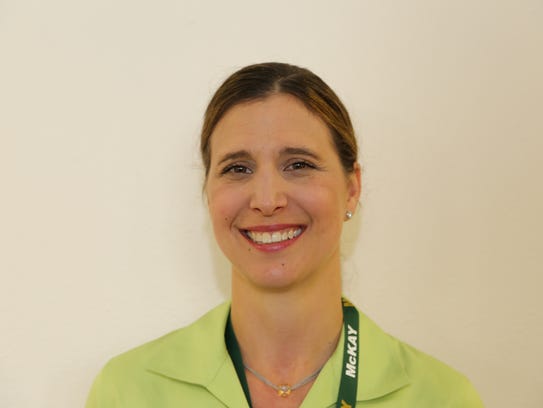 Zachary Person, the student who started the hashtag, said he has yet to hear a definitive reason as to why the district thinks it is a viable option to relocate LeRoy.

“McKay has had many principals over the years, some of which have contributed immensely to our school,” he said. “Sara LeRoy is one of them.

“Not only has our school been more spirit-oriented following her arrival, but we are also more focused on our academics and cultural awareness. We are a diverse school with many talented young people.

“I have personally witnessed participation and involvement in our sports and clubs skyrocket. I attribute these changes not only to our wonderful staff … but to our principal, Mrs. LeRoy, as I genuinely believe that she has taken our school in the right direction.”

Person, a junior at McKay, said one of the biggest issues is students and staff feeling left out of the decision.

“People have taken this (in) many different directions but ultimately this is about connecting the district and its students together on a closer level,” he said. “Communication is key and we need more of it.”

In response to the social media campaign, LeRoy said she was very humbled by it all, saying it made her feel appreciated.

Rob Schoepper, principal at Claggett Creek Middle School in Keizer, will be the new principal at McKay; Neil Anderson, who currently works in instructional services for the district, will fill Schoepper’s position.

“Change is really hard,” said Larry Ramirez, director of high schools for the district. “But I am confident (McKay is) getting someone great in Rob too.”

Ramirez said LeRoy was selected to fill Cynthia’s position after he held staff listening sessions with North Salem teachers, asking them what they wanted and needed in a replacement.

“After hearing (what North needed), we felt Sara was the right fit,” he said. LeRoy was approached about the position in March and accepted. LeRoy will also start in the new position July 1.

Ramirez said they did not hold similar staff listening sessions at McKay. He said Schoepper was selected to move to McKay since he already had experience with Title I and AVID schools.